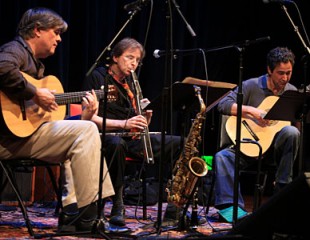 Arranger/Composer/Performer
Ernie Mansfield studied flute, sax, piano, and music composition at Interlochen Arts Academy, Oberlin Conservatory, University of Illinois, and University of the State of New York.  At age 21, he emigrated to France with the progressive folk group “Mormos”, where he wrote a share of the band’s material.

Returning to the Midwest United States, he continued to compose for bands, orchestras, and other ensembles. Eventually, he moved west to settle in the San Francisco area, which is now his home. His credits include albums, soundtracks, children’s music, commercials, music for educational software, orchestral works, and works for dance theatre. He has received grants from Meet the Composer, California Arts Council, and National Endowment for the Arts. Two albums: “Windsailor” and “ColorDrops”—featuring his own tangential jazz group—were released by Catero Records.

Ernie Mansfield is a classically trained musician, with experience in pop, rock, and jazz.  He also plays the EWI, an electronic wind synthesizer, as well as woodwinds and keyboard.

He has performed and/or recorded with many artists, including:  Dan Fogelberg, François Beranger (France), Joan Bibiloni (Spain), and Glen Cronkhite (ECM, Reunion Blues).

Grandma Got Run Over by a Reindeer

Artist Name: St. Mary's Saturday Musicians Description: This album was produced by Ernie Mansfield, featuring him on flute. Music for Reflection, a selection of folk, spiritual, and religious [read more...]

Featured Artist: Journey To Beyond